Why Do We Celebrate Thanksgiving Day?

One of the most popular holidays in November is Thanksgiving Day, commonly associated with food and feasts. But what's the day truly all about? In this blog, teacher Codie McGeever discusses Thanksgiving's history, what we learn from the day, and more!

When the fourth week of November rolls around, families across the country come together for a Thanksgiving feast.

But what is this holiday actually about? Hint: it’s more than turkey, stuffing, and football. In this blog, we’ll explore the history of Thanksgiving, what we can learn from it, and ways to celebrate!

The Thanksgiving vision that many of us in the United States have — of a full spread of food, pies, and family gathering — is likely derived from a variety of histories and legends.

Origins: A Picture of the Day

The Thanksgiving vision that many of us in the United States have — of a full spread of food, pies, and family gathering — is likely derived from a variety of histories and legends.

Among Europeans, Christian religious feasts for Lenten and Christmas celebrations have a long history of observance, though Christmas was banned by the Massachusetts Bay Colony in 1659. Puritans were known to hold elaborate funeral feasts. European Catholics, Jews, and Muslims practiced other feasting holidays, and Spanish Catholics that colonized what would become the southeastern and western United States brought some of these traditions with them.

In addition to historical feasting practices among Indigenous peoples and Europeans, several feasts were held in the Americas prior to colonization of the Massachusetts Bay. Some legends pinpoint the first American Thanksgiving as either the Plymouth gathering of 1621, or the 1637 celebration declared by John Winthrop, the governor of Massachusetts Bay Colony. However, two notable Thanksgiving celebrations are documented prior to these dates.

Regardless of the date and location of the first Thanksgiving feast, Abraham Lincoln’s Thanksgiving Proclamation of 1863 is also thought to have formalized the holiday and to have furthered the long-held vision of European colonizers. 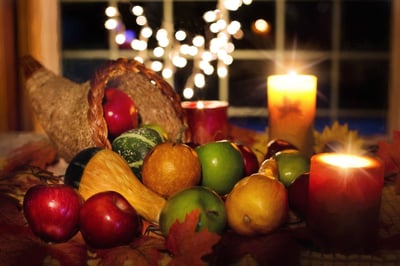 Indigenous Contributions to Our Lives

Indigenous peoples contributed extraordinary gifts to colonizers and to the world. They are known to have invented and provided syringes, baby bottles and formula, pest control, early pharmaceuticals, along with sharing products like corn and rubber, and knowledge of horticulture and farming. We have much to thank Indigenous peoples for. Many of their resources and practices were adopted or taken by colonizers, enabling their successful settlements in the Americas and providing technologies that would sustain and improve lives and communities. Much of the current agricultural and geographic infrastructure still in use today in the United States was established by Indigenous peoples many ages ago. (For more on this, read Roxanne Dunbar-Ortiz’s An Indigenous Peoples’ History of the United States.)

Understanding the Past, Informing the Future

It’s important to recognize this complex part of history, and to learn from it. The day after Thanksgiving is Native American Heritage Day, an equally important holiday that celebrates the contributions, culture, and history of Indigenous people in the United States. The National Museum of the American Indian provides many resources and materials for learning about Native peoples, their histories, and their cultures. As a Smithsonian Institution, the Museum offers the Native Knowledge 360° Education Initiative, including student programs and webinars, along with lesson plans and resources for families and educators to help facilitate learning about Indigenous peoples.

How Can I Celebrate and Honor the Day?

Today, for many families in our country, Thanksgiving is a time to gather together, feast, and express gratitude. The concept of kindness is paramount to this important holiday, especially given its controversial history. Here are some ways to prepare for and acknowledge Thanksgiving Day:

So what will YOU do for Thanksgiving Day this year? Whether it’s hosting a feast, sharing goodwill through volunteering, or educating yourself about Indigenous people, take time to remember the true meaning of this holiday!

About the Author: Codie McGeever is an English teacher at PA Virtual.

Photo credits to Debby Hudson on Unsplash and Jill Wellington on Pixabay; others as attributed.