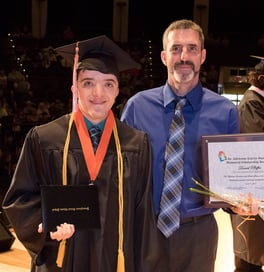 Daniel Pfeiffer was born with a rare craniofacial condition that required six major skull reconstructive surgeries. In addition to physical disabilities, Daniel was also diagnosed with a number of developmental learning disabilities, which made a traditional brick and mortar school environment nearly impossible.

Daniel has attended school online all his life. PA Virtual has given him the individualized learning experience in a way that meets his needs and has helped him exceed expectations. From a hospital recovery room, to the comfort of his own home, not only had Daniel worked hard to graduate on time from PA Virtual, but he has done so with honors and was the 2017 recipient of the Dr. Adrienne Scurry-Marinnie Memorial Scholarship. The scholarship, in honor of PA Virtual’s late Director of Family Support and Student Services, is presented to a graduating senior who overcame significant barriers in their education. 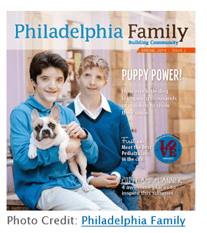 During his time at PA Virtual, Daniel overcame the obvious barriers that existed because of his physical and developmental disabilities, but became a vocal advocate for others with craniofacial conditions. The flexibility of a cyber school schedule allowed him to volunteer for the non-profit Philly Phaces to create craniofacial awareness through public speaking events. Philly Phaces is a nonprofit support group for children and families dealing with craniofacial differences and work directly with many of the patients through CHOP's Division of Plastic surgery. Daniel has also helped raise awareness by volunteering with another area nonprofit “My Name is Lentil” formed by Lindsay Condefer and her dog Lentil, who has a cleft lip and palate.

“I have never looked at my disabilities as an anchor in my life but as a form of motivation to build up my abilities,” said Daniel, who plans to pursue Mechanical Engineering at Stevens Institute of Technology.

Innovation in the medical field is nothing new to Daniel. He has already engineered some unique inventions of his own, such as a PVC wheelchair for a shelter cat unable to walk and a pouch that eases pain for patients who need Jackson-Pratt drains after surgery, which is common in the craniofacial community.

“As a lifelong patient at CHOP, I have firsthand experience with the difficulties that impact craniofacial patients,” he said. “By furthering my education at Stevens, I know that someday I can help fix these problems so that patients in any hospital have a positive experience.”