By: Jennifer Kilpatrick on September 20th, 2016 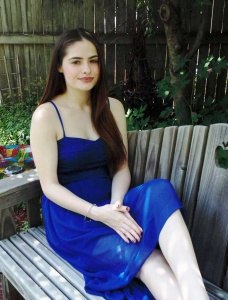 Parents and students choose cyber charter schools for many different reasons but one of the most widely known is flexibility. One student in particular, Isabella Uber, chose PA Virtual for just that reason. After her parents split, they considered both local school districts, and Isabella began to look into cyber school.

After extensive research, she chose PA Virtual four years ago, and hasn’t looked back!

“I love that I don’t have to worry about getting behind academically because of what house I’m in or what parent I am with,” said Isabella. “I can log on from anywhere, get my work done, and still spend quality time with my family.”

Isabella is able to split her time almost equally between her parents’ homes. Without having to shuttle back and forth on pre-picked days, she is able to be more involved in school. She is a member of the school student council, several clubs and recently found time for a new hobby – competing in a beauty pageant.

“My teachers here have always encouraged me to get involved and express myself, and I think that gave me the courage to enter the pageant in the first place,” said Isabella. “I learned so much (competing in the pageant) and it was such a different experience. I was named a finalist, but if I had won, I planned on using the title of Queen as a way to encourage others around me to volunteer and share the message of giving back.”

National America Miss prides itself on being a “purpose driven pageant,” with a focus on community service, communication and growing confidence in their participants.  Winners of individual State Queen Titles represent their state in various ways at local events, but also by focusing on the importance of serving one’s community.

Volunteering through DoSomething.org is the main way that Isabella gives back to her community – even without a crown. Since registering on the site, Isabella has participated in over a dozen campaigns for various causes. She has participated in a variety of campaigns that help on the local and national level, such as cleaning up over 1,000 items of trash from the streets in her neighborhood, or flagging illegal ivory items on Craigslist to stop elephant poaching across the world.

“I never thought I would have such an impact in the world until I started with DoSomething. I like taking a stand for those who may not have the voice to stand up for their beliefs. I love being able to help when I can and DoSomething provides me with those resources. I feel like I have a lot to offer the world and help those who are less fortunate.”

Isabella will be graduating in June, and her future plans involve giving back in a big way – to her country. She is considering entering either the Marines or the National Guard, but as she just began her senior year, there is still plenty of time to make that decision!